Everybody expected the Singh Brothers to make their presence felt during the match, but almost nobody predicted Mahal would receive help from a fourth source: The Great Khali The Punjabi Playboy showed up as Orton was preparing to climb down from the outer cage.

Khali shook the cage to force Orton to climb back down and then choked him out as he was still on the cage. WWE showed Khali getting his hand around Orton’s throat:

That allowed Mahal to scale the cage and climb down uninterrupted for the victory. Khali and Mahal celebrated his successful title defense: 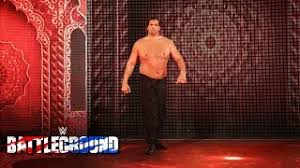 Both Wrestling Inc and Wrestling News Source questioned whether Mahal came out looking strong considering all of the help he received:

Mahal and Orton have been embroiled in one of WWE’s most intense feuds in recent months, and a unique stipulation was needed in order to settle the score.

The Maharaja initially defeated Orton for the title at Backlash due in large part to interference and distractions from the Singh Brothers.

That led to a rematch at Money in the Bank in Orton’s hometown of St. Louis.

Orton’s father, WWE Hall of Famer “Cowboy” Bob Orton, was watching the bout from the front row alongside several other wrestling legends.

During the contest, the Singh Brothers attempted to assault the elder Orton, which resulted in The Viper snapping and attacking both Samir and Sunil.

While Orton was able to get some level of retribution, Mahal took advantage of the situation when he re-entered the ring and managed to retain the championship.

An infuriated Orton demanded a rematch on SmackDown Live, and while commissioner Shane McMahon agreed to give him one, he allowed Mahal to pick the stipulation.

Despite Mahal seemingly going to great lengths to avoid Orton and to tip the scales in his own favor, he decided to trap himself inside the massive Punjabi Prison structure with The Apex Predator. 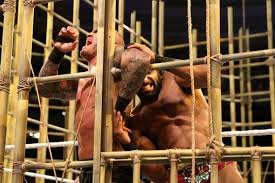 The Punjabi Prison match was first created for former world champion The Great Khali, and although Khali didn’t take part in the first one due to injury, he and Batista faced off in the second at No Mercy 2007.

It had been a decade since the match type was last utilized, but Mahal brought it back as an homage to Khali, who he considers to be his mentor.

Orton is among the most cunning and dangerous men in WWE history, which suggested he may have had the advantage in a match type that makes it very difficult to run away from the opponent.

In his short time as a main eventer in WWE, however, Mahal has shown that he is an intelligent Superstar who always has a plan at his disposal.

Sunday’s bout was an all-out brawl that featured both competitors taking out their frustrations on one another due to the bad blood between them.

Orton was out for revenge due to everything Mahal has done to him and his family, but The Maharaja showed once again why he may have staying power at the top of SmackDown Live.

Now that Orton has fallen to Mahal on three consecutive occasions, it appears almost certain that a new contender will emerge on the blue brand leading up to SummerSlam.bleacherreport.com

Eguavoen: Sudan, Egypt down, Guinea Bissau next to go

At last, Djokovic flies out of Australia after deportation