A huge title change, 4-way confrontation and the return of the ‘Demon’ confirmed

This weeks episode of RAW took place in Sasha Banks’ hometown Boston, MS. The show saw Sasha face Nia Jax to see who would face Alexa Bliss at SummerSlam. There was also a WWE Cruiserweight Championship match between Tozawa and the champion Neville.

Dean Ambrose kicked off WWE RAW and he wasted no time in calling out Seth Rollins after the events of last week. Seth came out and Dean asked him to stop playing games. The two of them failed to settle their differences and began a scuffle.

This led to blows as the two men rolled out to ringside when Sheamus and Cesaro’s music hit. Sheamus and Cesaro looked to have the two former SHIELD brothers where they wanted them but Seth and Dean soon regrouped and drove Cesaro and Sheamus off.

The two of them then faced off in the ring again before joining fists to the delight of the fans in attendance. Kurt Angle’s music hit after this and he came out and made the match official.

Sasha Banks was in her hometown tonight as she took on the indomitable Nia Jax. As expected, Alexa Bliss was at ringside for this match, seated on a high chair. Jax wiped Sasha out almost as soon as the match began as we headed to commercial.

We came back from commercial to see Jax still in control as she hit Sasha with a headbutt before going down to ringside. Sasha attempted a hurracanrana from the apron but Nia caught her and swung her into the barricade. Nia then rolled Sasha inside the ring for a 2-count. Nia followed it up with a bear hug and a leg drop for another nearfall.

Sasha reversed a chicken wing from Nia Jax to roll her up but only got a 2-count. Sasha then locked in a modified Crossface but Nia hit her with the Samoan Drop for another 2-count. Nia followed up with another Samoan Drop but this time Sasha rolled out to ringside.

When we came back from another commercial break, Sasha finally looked like she was gaining some momentum as she hit Nia with repeated knee strikes in the corner before Nia kicked her away. Sasha locked in a Banks Statement out of nowhere on an unsuspecting Nia. Nia tried to power out of it with a sideslam but Sasha reversed it into a tornado DDT before locking in the Banks Statement as Nia finally tapped.

We saw the Hardys backstage with Kurt Angle. Angle informed them that they wouldn’t be facing The Revival at SummerSlam when The Miz interrupted them. Miz told Angle off for springing Lesnar at them last week but Angle laughed it off and informed Curtis Axel that he would face Jason Jordan later in the night.

A referee intervened at this time and informed Kurt that there was a problem with Bray Wyatt and Finn Balor.

Elias was in the middle of the ring, serenading and demeaning the Boston fans when R-Truth’s music hit. Truth down to the ring but got taken out by Elias as soon as he entered the ring.

Big Cass made his way down to the ring. The shark cage was in the ring as Cass walked in and took the mic. The fans booed Cass out of the building and Cass talked over them saying that Big Cass needed Enzo because there was a new 7 footer on the block. He added that Big Show couldn’t beat him without Enzo at his side.

Enzo’s music hit as Cass was talking about how Enzo could do nothing to stop him from being the best big man in business. Enzo was soon joined by Big Show and the duo headed to the ring. Enzo distracted Cass as Show took a shot at him when Anderson and Gallows ambushed the Big Show.

Show fought back but was soon outnumbered. Gallows tied a leather strap around Show’s arm and held it as Cass slammed the shark cage door into it. Referees had to come out and get Cass, Anderson and Gallows to leave.

Neville vs Akira Tozawa (for the WWE Cruiserweight Championship)

This match got moved up from SummerSlam. The match started off at a fast pace as the champion and the challenger went back and forth before Tozawa took the upper hand, driving the champ out of the ring twice as we headed to a commercial break.

When we came back, the two men were going back and forth again. Tozawa hit a vicious enzeguiri forcing Neville to roll out to ringside. Tozawa rolled him back in and hit him with a standing senton before heading to the top rope. Neville made his way back to his feet right on time and joined Tozawa on the top rope. Neville hit Tozawa with a superplex and both men stayed down for a while.

Neville hit Tozawa with a flurry of kicks but Tozawa replied with a hurracanrana followed by a spinning enzeguiri. Tozawa went to the top rope again but Neville got back to his feet. In a moment of confusion, Neville used the referee as a shield. He tried to lock in the Rings of Saturn but Tozawa reversed it into a pinning combination.

Neville then took Tozawa down and headed to the top rope. He looked to hit the Red Arrow but missed. Tozawa took the chance and hit the Senton from the top rope before covering Neville for the 3-count.

This match originally seemed set for SummerSlam but was moved to RAW. Balor and Wyatt put on a great match and started off going back and forth before Finn drove Wyatt out to ringside and hit him with a PK from the apron.

When we came back from the break, Wyatt was in control. He had Finn in a side-headlock as he shouted and told fans that he was a god. Finn broke out and hit an enzeguiri in the corner before keeping an incoming Bray Wyatt at bay with kicks. Bray replied with a massive crossbody to take Finn down for a 2-count.

Finn replied with a Pelle kick and went for the Coup de Grace only for Bray to get back to his feet and send Finn crashing down onto the turnbuckle. Bray then hit the Sister Abigail for the win.

After the match, Bray poured some sort of liquid all over Finn.

Mickey James really good and came out of the blocks really fast. The 6-time Women’s Champion took Emma down before doing a kip up and heading to the top rope. Emma replied by taking Mickey down with a clothesline before standing on her hair and pulling her up by the arms. She followed it up with a double-underhook suplex.

Mickey looked down and out at this point but she suddenly replied with a Mick Kick out of nowhere to pick up the win.

Jason Jordan vs The Miz

Kurt Angle’s son Jason Jordan took on The Miz on RAW. Jordan came flying out of the blocks immediately sending Miz on the back foot. Jordan hit Miz with a running shoulder tackle in the corner and looked to follow it up with a suplex when Bo Dallas and Curtis Axel jumped into the ring and took Jordan out.

The Hardy Boys came out to Jordan’s aid and they cleared the ring. This match was now a 6-man tag match.

Jason Jordan and The Hardy Boys vs The Miz, Curtis Axel and Bo Dallas

The Hardy Boys traded tags early on as they worked on Curtis Axel. Jason Jordan then got tagged in and he continued working on Axel, targeting his left arm. Jordan then dodged a clothesline and hit a dropkick before continuing to work on Axel’s arm. Axel made his way back to his feet and tagged in Bo Dallas. Jordan hit Dallas with a Fireman’s Carry and tagged in Matt Hardy.

Matt worked on Bo for a bit before tagging in his brother Jeff. They double-teamed Bo before Jordan got tagged back in. Thanks to Curtis Axel, Bo managed to get a tag which made Miz the legal man and the Intercontinental Champion isolated Jordan and used his experience to get in complete control.

We came back from commercial to see Curtis Axel in complete control. At least, he was, until he attempted an elbow drop from the middle rope and missed. Jordan tagged in Matt Hardy and Matt was all over Curtis Axel. Matt hit a reverse bulldog before a distraction allowed Axel to tag Miz in. Miz stomped the living daylights out of Matt Hardy before tagging Bo back in.

Matt tagged Jeff in and the ‘Charismatic Enigma’ took Bo down before hitting a Whisper In The WInd for a 2-count. Jeff then went for the Swanton Bomb but The Miz distracted him. Dallas then hit Jeff with a Swinging Neckbreaker but Jordan came in and broke up the count.

A melee broke out and all 6-men went at it. Jordan suplexed Miz into Axel before hitting Bo with a suplex. Matt then hit Bo with a Twist of Fate before Jeff hit the Swanton Bomb for the win. 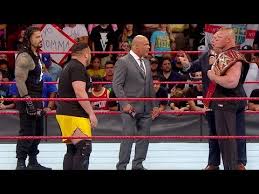 Paul Heyman came out with Brock Lesnar first and Heyman tore into Angle for conspiring against his client just because his client had ideas business interests of WWE. Heyman then addressed Brock’s opponents – saying that neither Joe, Braun or Roman would slay the beast.

Heyman then hinted that if Brock did indeed lose, he could end up inside a cage or else he would leave as champion. Joe’s music hit at this point and he made his way down to the ring.

Joe said that at SummerSlam, he would take the championship from Brock’s hand after putting him to sleep in the middle of the ring. He was followed out by Braun Strowman.

Strowman came out and was about to say he had been the last man standing when Joe interrupted and reminded him of how he’d taken Reigns out. Reigns’ music hit at this point and he went straight for Joe. Strowman then hit Roman with a running powerslam when security came in to keep Lesnar and Strowman apart.

The two behemoths levelled security after which the entire RAW locker room came out to keep them apart as the show went off air. sportskeeda.com