Manchester City are delighted to announce Ederson will join the Club from Benfica on 1 July.

The Brazilian goalkeeper, who impressed for the Portuguese champions throughout the 2016/17 campaign, has been given the green light to join the Club on a six-year contract.

He will become the Blues’ fourth Brazilian alongside Fernandinho, Fernando and Gabriel Jesus and is one of the brightest young goalkeeper prospects in world football. 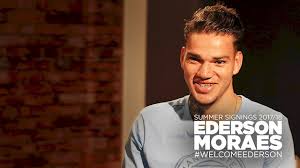 The promising teenager played 30 games before signing Primeira Liga side Rio Ave after just a season.

He would stay with Rio Ave for three seasons, playing 63 games in all competitions and catching the notice of many of Portugal’s bigger clubs including Benfica who bought the youngster in 2015.

He played several games for Benfica B and was initially understudy to Brazil’s national team first choice keeper Julio Cesar before becoming Benfica’s first choice throughout the 2016/17 campaign as the Eagles secured a league and cup double.

His reputation for point-blank saves quickly made him a popular figure among the Benfica supporters.

He said: “I like everything about Manchester City. This is a great club, the league they have here in England and they have amazing fans and they play splendid football. I have always had the dream to play in English football and now I’m going to make it true.

“With Pep Guardiola, City are growing more and more. He is putting in place a young team for the future. Those were important factors in making my decision.

“Manchester City has an amazing squad. I think they managed to have a good season. Next season, we will have to be focused to achieve the goal of winning trophies.”

City’s Director of Football, Txiki Begiristain, added: “We are delighted to bring Ederson to Manchester City. He is one of the best young goalkeepers in the Europe and he is an important addition to the squad for next season and the coming seasons.”

“He is young, has all the qualities you could want as a top-class goalkeeper and I think he’ll fit in really well to our squad.”mancity.com

Osimhen opens up: I grew up cleaning gutters, fetching water for a living