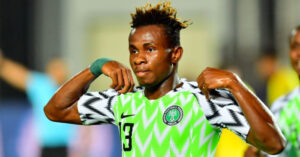 Villarreal coach Unai Emery has praised Samuel Chukwueze for his performance despite his side’s 2-0 loss to La Liga table-toppers Atlético de Madrid at the Estadio de la Cerámica on Sunday night.
Chukwueze, who made his first La Liga start of 2021, was named the King of the Match ahead of Atlético de Madrid stars such as Luis Suárez, Thomas Lemar, Saúl ñíguez and João Félix,
Playing on the right side of attack, the Nigeria international’s pace and trickery caused problems for the Atlético de Madrid defence.
Chukwueze missed eight matches played by the Yellow Submarine in all competitions due to a groin injury that required surgery but with his performance against Los Colchoneros and the fact that he went the full ninety, everything indicates that he is back to full fitness.
“We saw Samu’s return after two months without him and after solving some problems that prevented him from being comfortable on the field,” Emery said at the post-match press conference.
“He has given us certain things and we need players to widen the field for us, to be able to find the right one on one.
“We have been in games depending a lot on the full-backs and, moreover, without Peña and without Mario.
“So, we looked for alternatives of a control game, but we lacked certain things to be a little more complete. Today, with Samu, we have found many positive things.”
Chukwueze has contributed to four goals (1 goal, 3 assists) scored by Villarreal in the Spanish top-flight in 2020-2021.
Share

Jennifer Lopez, 51, bares all in cover art for new single

Oliseh: How Ajax blocked my move to Man United, Newcastle