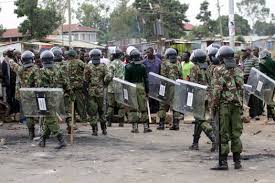 A six-month-old baby has died after being beaten by Kenyan police during a raid on her house as protests erupted following a disputed election result in Western Kisumu, her father said Tuesday.

The baby, Samantha Pendo, had been in a coma in hospital since Friday night when her father said police forced their way into their house during a crackdown on protesters in the slum where they live.

Officers fired tear gas into their house and battered down the door, before raining blows on the couple with batons. Samantha, who was in her mother’s arms, was left fighting for her life with head injuries.

“I have lost my daughter, a short while ago. Let her rest in peace,” said her father Joseph Abanja.

Samantha has become the face of police brutality during a crackdown on the protests that erupted after opposition leader Raila Odinga claimed last Tuesday’s presidential election had been rigged in favour of the incumbent Uhuru Kenyatta.

Local media have carried stories of similar police raids on private homes during the clampdown on unrest.

In a separate incident in the Mathare slum in Nairobi, a nine-year-old girl was shot in the back and killed on Saturday while standing on her family’s balcony, as police fired shots to disperse protesters in the street below.

The death toll from post-election violence has now risen to 17, according to an AFP tally. The Red Cross says it has treated 177 people with injuries.

Senior police officials, as well as Interior Minister Fred Matiangi, have insisted there has been no excessive use of force, claiming only criminals engaging in looting and robbery have been shot by police.

The Daily Nation accused the government of “blatant lies on riot deaths” in its editorial Tuesday.

“The government has badly handled the post-election unrest and created more confusion and public anger,” it said, urging police to “rein in officers hell bent on visiting mayhem on hapless citizens”.

Tears as family of five die vomiting blood in Anambra